#BLACKLIVESMATTER: FROM THESE ROOTS

REFLECTIONS ON THE ROADS TAKEN

A CENTENNIAL TRIBUTE TO MR. LINCOLN 1942

“Two roads diverged in a yellow wood,
And sorry I could not travel both
And be one traveler, long I stood
And looked down one as far as I could
To where it bent in the undergrowth;

Then took the other, as just as fair,
And having perhaps the better claim
Because it was grassy and wanted wear,
Though as for that the passing there
Had worn them really about the same “

--Robert Frost, excerpt from ”The Road Not Taken”

Robert Frost’s poem has great resonance in fall 2018 for the lives of countless young Black boys and men who have encountered adversity and multiple impediments to survival growing up in impoverished North Philadelphia.

Their collective and individual stories are a mosaic of The Road Not Taken and The Road Taken, a mosaic composed of adversity, tragedy and triumph.

The contemporary stories of Meek Mills and of Starbucks’ Rashon Nelson and Donte Robinson belie that of my father, John Nelson Doggett Jr., born April 3, 1918, at 1806 N. Van Pelt Street. He was the youngest son of impoverished family, yet one founded in Christian faith with an unshakeable belief in hard work, good deeds, and ultimate triumph.

My father, John and his older brother Bill—a famed 1950s jazz pianist and organist—were  subjected to the same kind of challenges that myriad Black youths would later face in North Philadelphia while Black entrapped by poverty during the  1960s-90s. However, what was different for them was the social and cultural mores found in Black North Philadelphia between the mid-1910s to the mid-1930s.

In an interview I recorded with my father in September 1991 that was inspired by Alex Haley’s “Roots,”, he repeatedly spoke about an engaged and intertwined community of neighbors and church folk who shared meals, neighborhood block parties, and rent parties. In this atmosphere,  musically inclined young boys and men—like my father and his older brother—hooked  up with other “kids on the block” to have weekly jam sessions. These jams occurred not only at 2329 North Van Pelt Street, the house that my father’s family bought during the 1920s, also at the houses of their friends from North Van Pelt to Susquehanna Avenue,  Dauphin Street and Diamond Street and beyond.

Another unmistakable saving grace for my father and other young Black men during the 1920s and ‘30s was the important role played by the neighborhood’s Black churches.  His mother was the church pianist at Haven Methodist Church and his father  was a trustee at Miller Memorial Baptist Church.

After graduating from Gen. John F. Reynolds Elementary School in 1932, John Doggett excelled at Central High School between 1932 and 1936 in track and as a tenor saxophonist. During a time of poverty and  great economic inequality, what road would take him “out of the ‘hood?”

Was it one of the roles typically open to black males of that era:  a Pullman porter, post office letter sorter, shoeshine boy, bellhop, or janitor?

Or should he follow in his father’s footsteps and operate an elevator at Snellenberg’s, a middle-class downtown Philadelphia department store. Or was the road out to  excel well enough with his  saxophone  to play with his older brother Bill, a popular pianist and side man for visiting Black swing bands—Philadelphia’s own version of Pittsburgh’s  Billy Strayhorn. In fact, my father was the lead tenor saxophone in his brother’s popular 1937-38 swing band, the Castle Club Orchestra, and later in a smaller combo version known as The Five Majors.

John Doggett Jr. (right) with older brother Bill and their parents outside their North Philadelphia home

Before being one of the fortunate few to receive a coveted Senatorial Scholarship to Lincoln University in 1939, my father entered Mastbaum Music School in 1937, where he was part of its conservatory. He graduated at the top of his class and was offered a musical scholarship.

During our 1991 interview, my father spoke about how proud he was to have graduated from Mastbaum at the top of his class in classical flute and jazz saxophone.

Yet, due to the color bar in classical music, there were neither jobs nor a future for Black males at the Philadelphia Orchestra with either Leopold Stokowski, its renowned emeritus conductor, or Eugene Ormandy, its youthful new conductor. Again, the road not taken.

For many impoverished Black male youth of the late 1920s and 1930s, Black Philadelphia ministers with political clout were instrumental in helping many of their church youth with good academic records to apply for and receive “Senatorial Scholarships.”

For the 21-year-old John Nelson Doggett Jr., the coveted Senatorial Scholarship he received to attend Lincoln University proved to be the road taken.

Entering Lincoln in 1939, my father distinguish himself not only as an outstanding philosophy major but was also was blessed to receive The Elizabeth H Train Memorial Prize in Oratory and The Alfred Walker Memorial Prize.  A member of Phil Kappa Epsilon and Delta Rho, he also received a varsity track Award, was voted Mr. Lincoln 1942, served as a campus barber,  and played tenor saxophonist in The Lincoln University Football Band.

The 1942 Lincoln yearbook is made more notable by the fact that Frank Doggett, profiled above, was my father’s first cousin.  Frank’s father, who was originally from Norfolk but had settled in Atlantic City, N.J., was the half brother of John Nelson Doggett Sr., my dad’s father.

After Lincoln University, my father attended and graduating from New York City's historic Union Theological Seminary. At the end of World War II, his first ministry assignment brought him to the San Francisco where, as a U.S. Army Reserve chaplain, in 1945 he began ministering to African American shipyard workers in the Bayview District at Southgate Community Church.

During his four years in the San Francisco Bay area, my father came into contact with other progressive Black faith leaders including the Rev. Howard Thurman, who founded the first interracial church of worship in the country, the Church for the Fellowship of All Peoples, in San Francisco. Socially and politically progressive, Thurman’s theology enhanced the progressive theological foundation of my father’s teachers and mentors at New York’s Union Theological Seminary.

Rev. Thurman’s progressive theology would become a cornerstone for both my father and a young Atlanta minister, the Reverend Martin Luther King Jr.

In 1949, my father’s ministerial assignments subsequently  brought him to Southern California, where he would become one of the icons of social ministry and justice—first  at, Scott United Methodist Church in Pasadena, a renowned Black Methodist church (1949-54), then  at Hamilton Methodist Church, one of Los Angeles’ historic Black churches (1954-64).

The dawn of the civil rights movement which began with the landmark 1954 U.S. Supreme Court decision, Brown v. the Board of Education of Topek. Eliminating the “separate but equal” educational standard, it inspired my father’s belief in the tenet espoused by the young minister, Martin Luther King Jr. s that “The moral arc of the universe is long but bends towards Justice.”—which was actually a paraphrase of a portion of a sermon delivered in 1853 by Theodore Parker, an abolitionist minister.

April 5, 1956 Los Angeles Black newspaper, The Herald Dispatch, with iconic bold early civil rights movement headline indicating that “LA Blacks to Walk” with assistance of the young Rosa Parks, only four months removed from her arrest on a bus in Montgomery, Ala.

Between 1954 and 1964, in Los Angeles 1954-64 my father became one of the iconic faith and social justice leaders at the dawn of the civil Rights movement.  With the financial costs and needs of the movement exploding by 1960 with bombings, Southern resistance arrests,  and escalating court costs, King created a Los Angeles fundraising arm for his Southern Christian Leadership Conference named the Western Christian Leadership Conference.

As the conference’s founding treasurer, the Rev. John Doggett Jr. was responsible for key fundraising that targeted Hollywood-based entertainers and the larger Los Angeles progressive community. He supervised fundraising for the “Freedom Riders;”, hosted the  Eleanor Roosevelt in a legendary Community Groups for Kennedy Town Hall Forum in September 1960;, chaired Los Angeles’ first “Freedom Rally” in April 1961; and was a key force behind the second such rally, a historic event held at L.A.’s  Sports Arena. These two rallies were the first two progressive political events to occur in Los Angeles after the 1960 Democratic National Convention that nominated John F Kennedy for president. For Los Angeles, this Sports Arena “Freedom Rally” was its very own precursor to the 1963 March on Washington For Jobs and Freedom.

In 1964, my father accepted a new ministerial assignment at Union Memorial Methodist Church, a historic Black Methodist Church in St. Louis, Mo.. From then through the 1990s, my father delivered a seasoned social justice ministry and leadership that gained him a reputation i as St Louis’ Medgar Evers.

He was engaged in every aspect of St. Louis’ civic and pastoral leadership. He was one of the first Black ministers engaged in police-Black community forums between1965 and 1975.  His social justice and civil rights leadership reached a high point between 1970 and1985, when he became the first Black superintendent of the St. Louis Methodist Church District; was elected president of the St Louis NAACP chapter and, as president, led the Central Medical Center, a restored North St. Louis hospital. 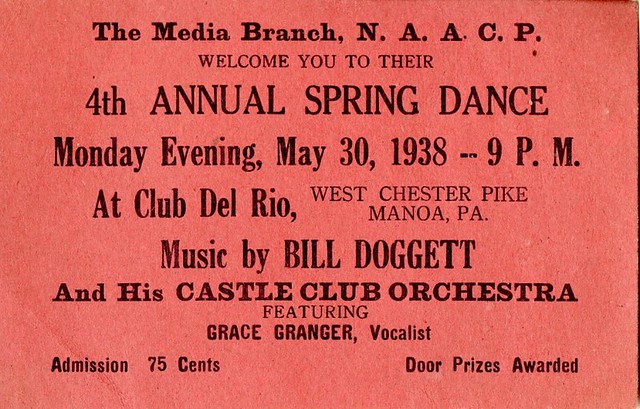 From these roots of impoverished beginnings in North Philadelphia to civil rights legacy in St. Louis, I honor the life and legacy of my father, the Rev. John Nelson Doggett Jr. during the centennial year of his birth.

This article was written by William Ballard Doggett II, youngest son of Mr. Lincoln 1942. He receives email at bdoggett55@gmail.com.

Lincoln University, the nation’s first degree-granting Historically Black College and University (HBCU), educates and empowers students to lead their communities and change the world. Lincoln offers a rigorous liberal arts education to a diverse student body of approximately 2,200 men and women in more than 35 undergraduate and graduate programs.